Bankruptcy Chapter 7 There are two main types of bankruptcy: liquidation and reorganization. Chapter 7 bankruptcy refers to liquidation bankruptcy, can apply to businesses or individuals and may involve a different process depending on whether there’s unsecured or secured debt.

Bankruptcy Chapter 13  Chapter 13 bankruptcy, commonly referred to as the “wage earner” bankruptcy, provides the opportunity to avoid foreclosure or repossession. A repayment plan that specifies how debts will be paid off during a specific period of years is required. Certain factors apply, such as how much income you make and how much you would have paid unsecured creditors if you had filed for Chapter 7 bankruptcy instead.

Bankruptcy Chapter 11  Chapter 11 bankruptcy is primarily used by businesses that are struggling financially. Individuals tend to avoid this form of bankruptcy because it is time-consuming and expensive.

Wage Garnishment When a percentage of money is deducted from your salary or compensation to pay off a debt. This process may also be referred to as a wage attachment or wage withholding and is ordered by a court.

Credit Counseling: Help with managing money and debt including credit cards or loan payments or as simple as developing a budget and personalized plan to improve personal finances.

managing your money and debts, help you develop a budget, and offer free educational materials and workshops.

Confidentiality Agreement  A contract that is legally binding in which an individual or business promises not to disclose certain information without permission. Another term for confidentiality agreement is a Non-disclosure Agreement (NDA). Most businesses have information that must be kept secret, making the non-disclosure agreement a necessity.

Power of Attorney (POA) Written authorization that allows an individual to act on behalf of another. This relationship ends with the death or incapacity of the other person. The individual is referred to as the donor, principal, or grantor (of the power).

Durable Power of Attorney Written authorization that allows an individual to act on the behalf of another and  remains in effect even after incapacity or death. The individual is referred to as the donor, principal, or grantor (of the power).

Breach of Contract When two parties enter into a binding contract and one of those parties breaks the contract for any reason that isn’t outlined in the contract. The suing party must prove that the breach of contract caused some kind of significant loss or damage.

Succession Planning  Selling or transferring a business to a family member(s). Numerous details will need to be addressed both legally and financially. In order to avoid future burdens and unnecessary tax ramifications it is wise to seek legal counsel regardless of how simple or complex the transaction may be.

Civil Litigation  Litigation refers to the process of resolving a dispute in court. The disagreement between two parties is not criminal in nature. A typical civil lawsuit deals with issues such as a breach of contract or negligence.

Breach of Contract When two parties enter into a binding contract and one of those parties breaks the contract for any reason that isn’t outlined in the contract. The suing party must prove that the breach of contract caused some kind of significant loss or damage.

Comparative Negligence/Contributory Negligence A rule for allocating damages when both parties are at least somewhat at fault, or the percentage of negligence. The court is allowed to put a cap on the amount the suing party will receive. Massachusetts is considered a “51 percent rule” which is modified comparative negligence. This is usually best explained in regards to automobile accidents where both parties are at fault. If one party is more than 51 percent at fault, they can’t collect any damages against the other party for what has occurred. It’s up to the courts to rule who was at fault, and for how much of the accident. It’s possible for both parties to be less than 51 percent at fault, so they both could receive damages.

CORI stands for Criminal Offender Record Information listing a person’s criminal history for any criminal case in the state court within the Commonwealth of Massachusetts.

(OUI) Operating Under the Influence  Routinely known as ‘drunk driving’ OUI in Massachusetts refers to operating a motor vehicle while one’s blood alcohol content (BAC) is above the legal limit suggesting it’s unsafe for a person to be driving. The penalties are strict and there is a ‘look-back law in the Commonwealth of Massachusetts.

Misdemeanors are considered less serious crimes, that are not punishable by confinement in a state prison, probation, fines, or community service.
Examples: Molly stole a new video game from Walmart and got arrested;  Molly was arrested for drunk driving, which did not cause any injury.

Prosecution is the term for the legal proceedings instituted against a person accused of committing a crime.

Supplemental Security Income (SSI) A Federal income supplement program meant to help those who do not have any substantial income or assets.  It is only available to adults and children who are blind, disabled or age 65 or older, that must meet certain income requirements. There are no minimum work requirements.

Security Disability (SSD) and Supplemental Security Income (SSI)  Benefits for which injured workers may be eligible that are paid by the federal government. See Workers’ Compensation for state benefits.

Alimony  is a court order  to pay financial support to the spouse in need for a period of time.

Guardianship A court appoints a guardian or protector to make and manage the personal decisions of another due to old age, physical and/or mental limitations.

Mediation is a way to reach an agreement in a divorce setting without the necessity of going through a formal court process with a judge. The mediator, also known as the “neutral” does not legally represent either party in the divorce. Mediation is an alternative dispute resolution (ADR). In most cases the mediator is a licensed, practicing attorney.

Complaint for Divorce is the formal process of filing for divorce in the Commonwealth of Massachusetts. When these papers are filed to dissolve the marriage, the answering party is allowed twenty (20) days to respond. Meeting the deadline is critical and why it makes sense to contact an expert divorce and family law attorney as soon as possible.

Conservatorship A court appoints a guardian or protector to manage the financial affairs of another due to old age or physical and/or mental limitations.

Immigration The process of relocating permanently to a foreign country or the area in an airport or at the border where officials check the entry permits and documentation of people who are coming into a country.

Visa Petition The first step in applying for permanent residence in the United States, also referred to as a “green card.”

Visa An endorsement or authorization on a passport indicating that the owner/holder is allowed to enter, leave, or stay for a specific period of time in a country. There are many types of visas.

Legal Negligence   Four (4) elements must be proven by a preponderance of the evidence (more likely than not):

Tort Area of law, which addresses civil liability (legal responsibility) for wrongdoing. Usually monetary awards are sought to compensate for injuries and/or other damages.

Conveyance  The legal process of transferring property from one owner to another.

Will  A document that instructs how someone wished to distribute their assets after they die.

Probate The legal process of seeing that the terms of a Will are followed. If someone dies without a Will the court decides how to distribute the assets in accordance with the law but the Will helps the court follow the wishes of the deceased.

Workers’ Compensation/Accidental Disability Retirement  Benefits for which injured workers may be eligible that are created by state law. See Social Security Disability (SSD) and Supplemental Security Income for federal benefits.

Pro Se  Do-It-Yourself (DIY)  You represent yourself in a legal action.

Discovery  A legal term for the process of obtaining information prior to a trial. 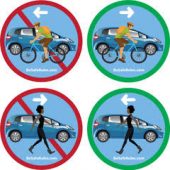 Know the Rules of the Road: Bikers ride with traffic; Pedestrians walk against traffic. BeSafe.com