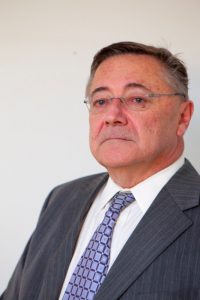 The lawsuit was initiated in 2012 by the owner of a vacant 16,477 square foot lot in Falmouth. The land is one of the last undeveloped lots in a residential subdivision known as “Wild Harbour Estates.” My client’s parents purchased the land in 1975. She inherited the land in 2005 after her parents died.  The lot has water views of Wild Harbor and Buzzards Bay and the Town currently assesses it at a value of $653,000.00.  My client and her parents before her paid the real estate taxes on the lot for 41 years.

We presented evidence to the jury that the land was buildable when it was purchased in 1975 and that it continued to be buildable until 2008, when the Conservation Commission expanded its regulations. The property borders a salt marsh and is transected by a coastal bank, but is surrounded by large waterfront homes that were built before the regulations changed.

At trial, we claimed that the Commission’s denial of her variance request constituted a “regulatory taking” and that the Town must compensate her for the diminished value of her land.  The Fifth Amendment of the United States Constitution, and a similar provision in the Massachusetts Constitution, each prohibit the taking of private property for public use without just compensation.  The U.S. Supreme Court has ruled that a government regulation may result in a taking of private property if it interferes too significantly with a person’s ability to use his or her property.

The Town argued that my client should have expected the regulations to change, and should have taken steps to build her house before they changed.  As stated by my client, however, unlike a carton of milk, land does not have an expiration date.

We presented evidence to the jury that the land was worth $700,000 as a buildable lot and only $60,000 if it were not buildable.  We claimed that the Commission’s regulations caused this 90% reduction in the value of her land.   The jury agreed that the Town effectively “took” her land, and awarded damages to my client.

Outcome: A Barnstable Superior Court Jury recently returned a verdict against the Town of Falmouth and the Falmouth Conservation Commission and awarded my client, a Falmouth property owner, $640,000.00 in damages. With interest, the judgment is nearly $950,000.00.